The WRLtH scheme is a project on behalf of Network Rail to construct a new 6.5km rail link between Langley Station (near Slough) on the Great Western Main Line (GWML) and Heathrow Airport Terminal 5 (T5). The new rail connection would speed up journeys to Britain’s busiest international airport, by allowing passengers to travel to the airport from the South Coast, South West, South Wales and West Midlands without going into London Paddington.

The Western Rail Link to Heathrow (WRLtH) would leave the Main Line between Langley and Iver. It would then descend underneath the main railway line into a cutting before entering a 5km tunnel. The tunnel would pass under Richings Park and Colnbrook and then merge with existing rail lines underground at Heathrow Terminal 5. Terminal 5 Rail Station currently has four operational platforms and two safeguarded for the extension to the West and South. [Credit: Network Rail Website]

Due to our long-standing technology support relationship with Heathrow Airport Limited (HAL) Rail, we were scoped to deliver the Communication and Control High-Level and integration designs (GRIP 3 equivalent) to Network Rail at the following locations:

We developed co-ordinated designs for the following communication systems:

We developed co-ordinated designs for the following control systems:

The following documentation was produced for each system.

The CCTV, TCS and PA/VA were specialist deliverables of this project.

CCTV
We used CCTV modelling software to provide 3D simulated views and visualise the Field of Views. The tool was used to visualise public-facing assets on the platforms such as CIS screens, Cellular antennas and Help Points. This provided a coordinated design and a bill of materials. 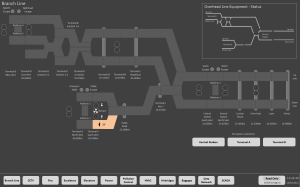 These were (not limited to):

PA/VA
To demonstrate the acoustic performance criteria of the speaker locations, an assessment of the Speech Transmission Index (STI) was undertaken for the publiC concourse and platform areas of the new platform. The output of the modelling validated the required for acoustic treatment in specific locations to meet the 0.5 STI criterion.